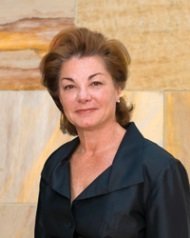 Cheryl L. Willman, MD, has served as Director and CEO of the University of New Mexico Comprehensive Cancer Center (UNMCCC) since November 1999. She is a UNM Distinguished Professor of Pathology and Internal Medicine at the School of Medicine where she holds the Maurice and Marguerite Liberman Distinguished Endowed Chair in Cancer Research. Dr. Willman received her M.D. in 1981 from The Mayo Medical School in Rochester, Minnesota. Awarded one of the first Physician Scientist Awards in 1984 from the National Institutes of Health (NIH), Dr. Willman completed her residency and post-doctoral training in pathology and cancer research at the NIH in Washington DC, the University of New Mexico, and the University of Washington in Seattle.

Dr. Willman is an internationally recognized physician-scientist, whose research focuses on the use of genomic and next generation sequencing technologies to identify novel targets for improved diagnosis and therapy in leukemia and the translation of these targets to develop new and more effective treatments. Her work has led to the discovery of novel leukemia-causing mutations in children and adults of Hispanic ethnicity and American Indian genetic ancestry and in other poor risk leukemias. These discoveries are now being employed in several clinical trials for pediatric and adult leukemia patients nationwide sponsored by the National Cancer Institute (NCI), where the UNMCCC serves as the national reference laboratory for genomic diagnostics and sequencing. Dr. Willman's work has been continuously funded by the NIH, NCI, and the Leukemia and Lymphoma Society for over 25 years and she is a highly cited physician-scientist (H-index: 79; 28,586 citations) who has published over 235 papers reporting her work in the highest quality medical and scientific journals (New Engl J Med; Cancer Cell; Nature Medicine; Nature Genetics; Blood; Science); she also holds 11 patents or patents pending. Dr. Willman is a leader in cancer precision medicine, cancer genomics, and has developed national protocols that consent cancer patients to genome sequencing of their tumors so that they can be treated with the most effective targeted therapies. She also leads consortia of scientists from UNMCCC and Los Alamos National Laboratory focused on the use of cancer genome sequencing to target cancer patients to more effective treatments and to uncover cancer-causing mutations in our environment, and, consortia with Sandia National Laboratory focused on the develop of cancer nanotherapeutics.

Over the past 15 years, Dr. Willman has led the development of the clinical cancer treatment, research, education, and community outreach programs of the UNMCCC, culminating in its most recent designation as one of the nation's 46 NCI Designated Comprehensive Cancer Centers -- the leading (top 3%) of the cancer centers of the United States. The 132 oncology physicians, 130 researchers, and more than 500 staff at the UNMCCC are dedicated to providing state of the art, comprehensive, fully integrated cancer treatment for all New Mexicans, conducting world class research, training the next generation of cancer healthcare professionals, and delivering community outreach programs throughout New Mexico's urban, rural, and tribal communities to overcome the state's significant cancer health disparities. The UNMCCC provides care for more than 11,000 patients annually and has received the highest accreditations and commendations from all national certifying agencies (NCI, TCJ, ASCO Quality Oncology Practice Initiative, ACR, and the ACOS Commission on Cancer).

Throughout her career, Dr. Willman has received numerous awards from NCI, Leukemia and Lymphoma Society, Howard Hughes Medical Institute, and The W.M. Keck Foundation. She received The Stowell-Orbison Award, The Benjamin Castleman Award, and The Young Investigator Award from the International Academy of Pathology. She was founder and President of the Association of Molecular Pathology and is a member of the U.S. Department of Energy Women in Science Hall of Fame. Dr. Willman serves on several NCI committees including the NCI Board of Scientific Advisors, the NCI-Frederick National Laboratory for Cancer Research, the Scientific Advisory Board for the NCI Center to Reduce Cancer Health Disparities, and on the Boards of 10 other NCI Designated Cancer Centers. She has received several distinguished public service awards, including the 16th Governor's Award for Outstanding New Mexico Women (2001), The New Mexico Distinguished Public Service Award (2005), the New Mexico La Estrella Award (2013), The New Mexico Humanitarian Award (2014), and the Woman of the Year Award from the International Women's Forum (2016).